Anterior Cruciate Ligament (ACL) injuries are on the rise worldwide, especially in younger adolescent athletes ages 5-14. ACL injuries increased by 147.8% from 2.74 per 100,000 people in 2005/2006 to 6.79 per 100,000 in 2014/2015. The majority (96.9%) of these injuries were in 10- to 14-year-olds (1). This can be devastating in skeletal immature individuals as it may lead to increased risk for arthritis, decreased activity levels, and even rise in obesity rates as they continue to age age. Only 63% of non-elite athletes will return to their pre-injury level of sport after ACL reconstruction (2).

What is the ACL? The ACL is one of the 4 major ligaments in the knee joint and is most commonly injured during sporting events that involve running, jumping, and quick change of direction. The ACL connects your Tibia (shin bone) to your Femur (thigh bone) and prevents the shin from translating forward on the thigh bone and aids in controlling rotational forces on the lower leg. The ACL can be torn in several different ways including:

On average 70%–78% of ACL injuries occur via a non-contact mechanism (3). This simply means most occur with a simple change of direction with no contact from the opposing player.

Why is the ACL So Important for our Knee? The ACL is one of the important ligaments for knee stability and plays a larger role in overall leg stability. The ACL prevents the knee from shifting during dynamic movements such as cutting, running, and jumping. Without the ACL the knee becomes very unstable and gives away when performing those quick movements. Imagine jumping for a rebound in basketball and the knee giving away every time you land. Or every time you plant to change direction the knee gives out. Makes it difficult to play sports without running, jumping, and cutting doesn’t it? Those that rely on quick movements side-to-side often can’t play without having it repaired.

For other great resources on injury prevention, particularly the ACL, check out BrianMac Sports Coach.

Why Are Females at a Greater Risk for ACL Tears?

Women are 4x-8x more likely to have an ACL tear than men depending on the source of data.

The causes are multi-factorial but include strength imbalances from the quads to the hamstring, quad dominant landing patterns, landing with straighter legs, wider hip angles, and even hormonal differences may play a role (4). Combine these factors in addition to increased participation in female youth and adolescence sports and it’s no surprise that ACL tears are no longer considered a “rare” injury.

This increased rate of ACL tears does not present until after puberty so it is important to enroll in or begin an ACL prevention program in the early teenage years (4).

Why are ACL Tear Rates Increasing in Adolescents?

Not only are rates higher among females but overall rates are increasing among all adolescent athletes ages 5-14. The vast majority of ACL tears in this age group are in organized team sports but remain non-contact mechanisms of injury. The upward trends in this younger age group includes an increase in competitive sports overall, an increase in single sport concentration leading to muscle imbalances, an increase in year round participation in sports, and less free time for unconstructed play. With both the earlier concentration in single sports and the less unstructured play time, young kids don’t develop the body awareness and the strength needed by moving in different patterns. During our growth spurts our strength, neuromuscular ability, and proprioception may be unbalanced and contribute to an increased risk of ACL tears (5).

What Are ACL Prevention Programs?

Since ACL injuries are increasing in young athletes and in females in particular, ACL prevention programs have recently become popular. In ACL prevention programs, the young athletes are put through through a series of exercises to help reduce their risk for injury. These programs emphasize strength, balance, and movement education so that when the time comes the body automatically adjusts and avoids injury.

In a recent study done by Gilchrist et al  looking at division 1 female soccer players, they were 1.7x less likely to have an ACL injury than those that did not participate in such a program. In a separate study female soccer players between the ages of 14-17 were able to change their landing mechanics and reduce their chances for injury. Finally, in a large study by Mandelbaum and Silver et al with nearly 3,000 participants showed participants were 88% less likely to sustain an ACL injury after an ACL prevention program.

An ACL injury prevention program could make a lifetime of difference. If there is a program near you then I suggest signing up and doing all that you can to get the most out if it. If there is not one nearby then don’t worry, you can perform the exercises listed below. Per the most recent scientific evidence the program needs to be performed more than 1x a week and for a minimum of 6 weeks. The program below is intended to be performed 3-4x a week for 8 weeks.  Here are some exercises to start now.

Start by lying on your back with your knees bent and extend the other knee as shown.

Next, raise your buttocks off the floor/bed using only the one leg

Try and maintain your pelvis level the entire time and don’t let your body rotate down. 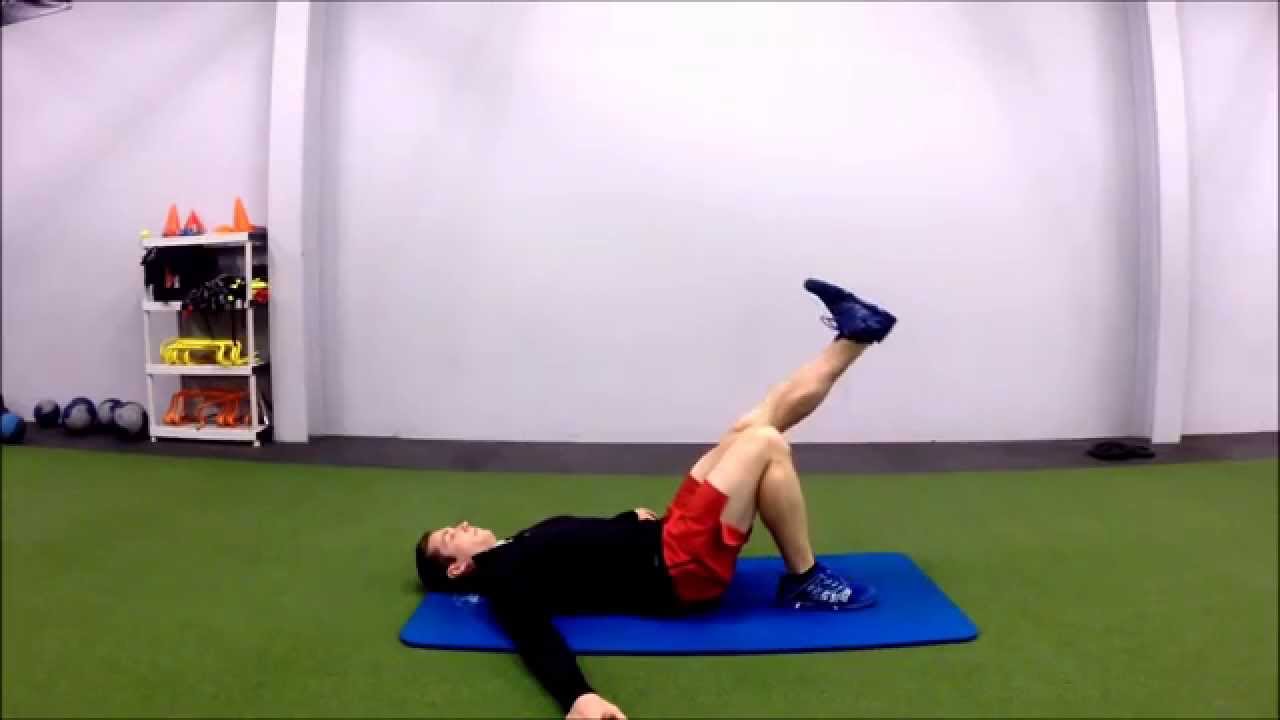 Start with your legs shoulder width apart, bend your knees and slowly lower your body down into a squat position. Make sure knees do not past toes and hold it in that position. This is for injury prevention so feel free to push it for depth and speed. 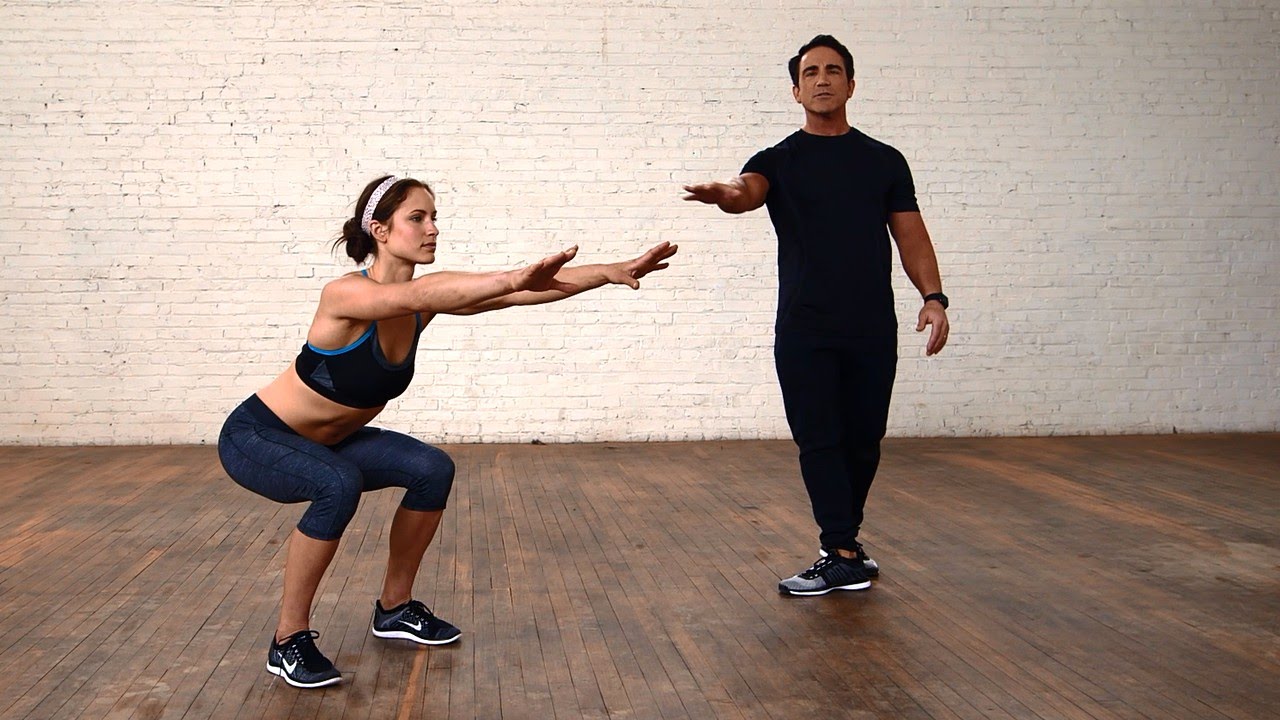 Start by  standing facing forward near the agility ladder. Bend your knees and elbows.

Hop with both feet at the same time with one foot into the first square and the other to the side of the first square. When you land, bend your knees into a squat position. Next, hop forward with both legs so that the foot outside the ladder moves to the second square and the other foot moves outside the ladder on the opposite side. Be sure to perform a squat with each landing. Repeat this sequence as you progress through the ladder.

Increase your speed as you get better. 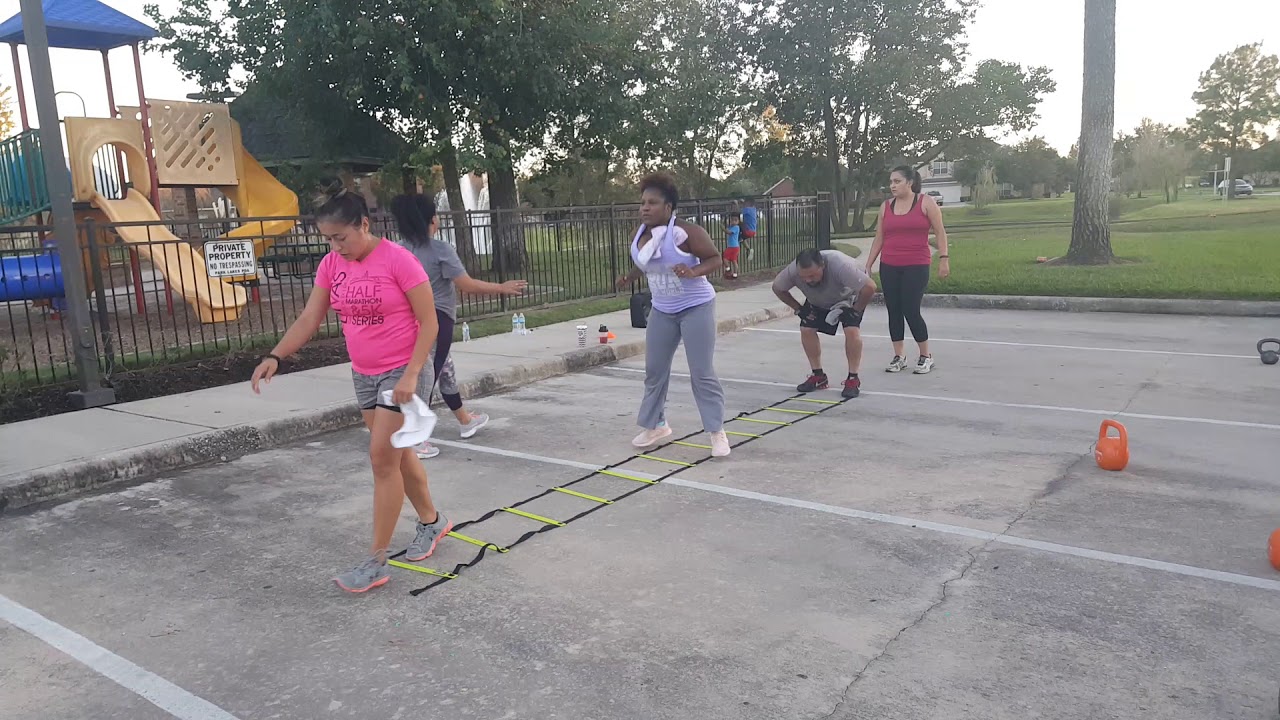 This is maybe our most favorite exercise in the clinic. Place your back foot on a box or bench and step out into a lunge
Lower your hips slow and controlled using a 5 seconds count toward the floor by squatting back and down without letting your back knee touch the ground return to the starting position by driving your weight back up with your front leg.

Box for keeping the foot elevated, Adjustable weights for resistance 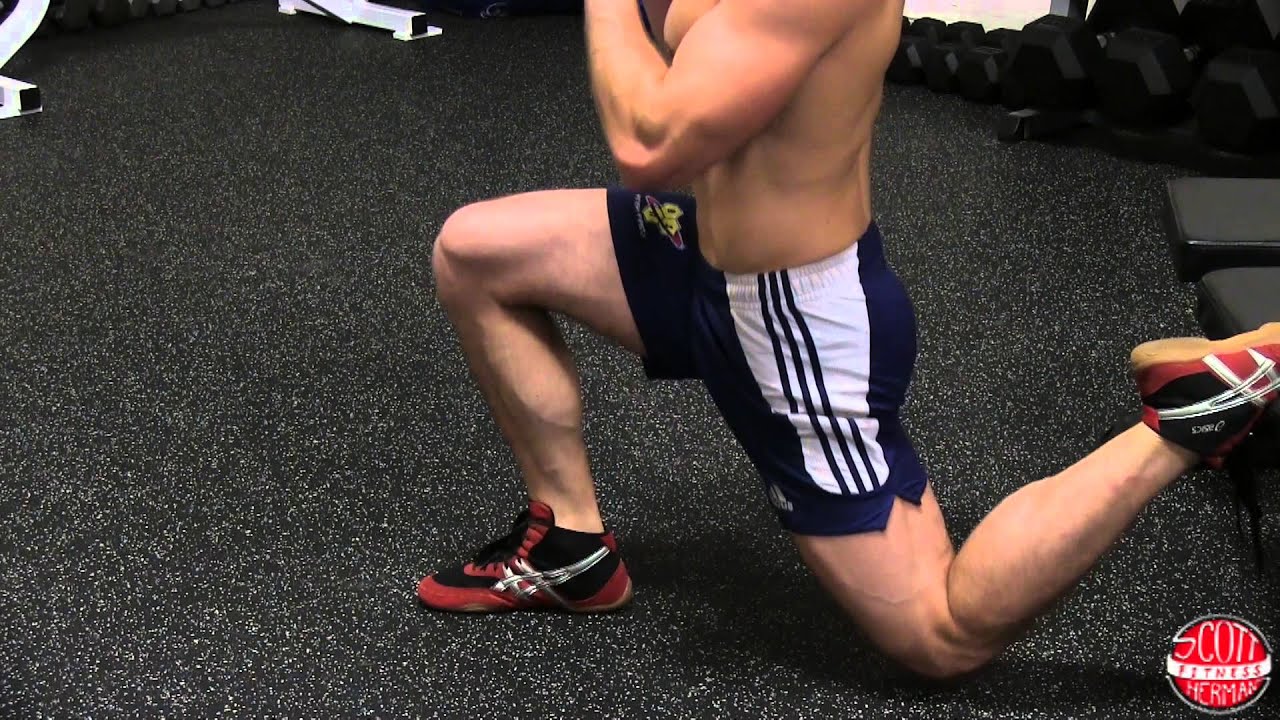 We love this exercise so much that wrote an entire post about it here: Why The Lateral Step Down is one of the Best Strengthening Exercises for Knee Pain. Start by Standing on one with the other leg off the step hovering in the air. Slowly lower yourself down to the floor and back up again. Do not shift weight to un-involved leg, just tap the ground and come back up. Try to keep your hip, knee, and seconds toe in a straight light, do not allow the knee to dive inward towards the other knee. 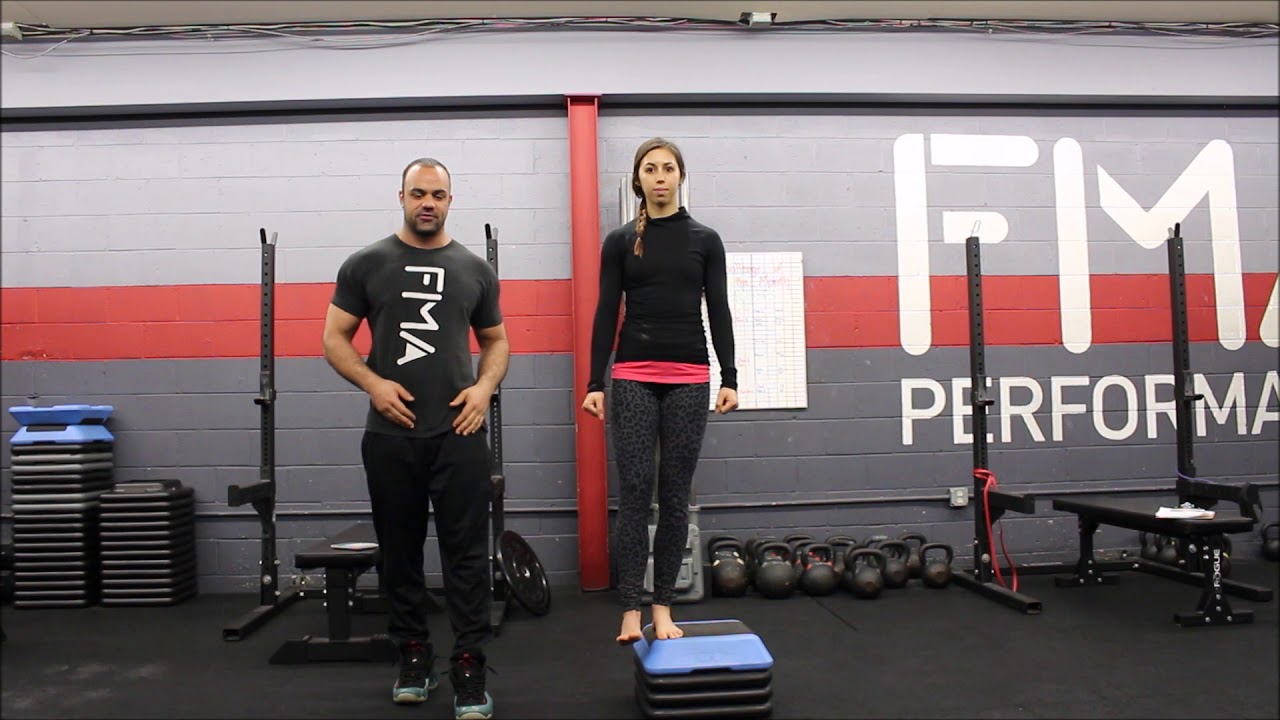 Lie down on your back with your feet on the ball and your knees straight. Lift your hips off the table/floor and curl the ball towards your body by bending your knees. Straighten your legs back out and lower your body to the table.

Stability ball and exercise mat to lay on the floor

Start by standing on your left leg, jump to your right and land on your right leg. Try to take as big of a leap as you can as long as you can stick the landing. Repeat.

ladder to bound from one side to the other 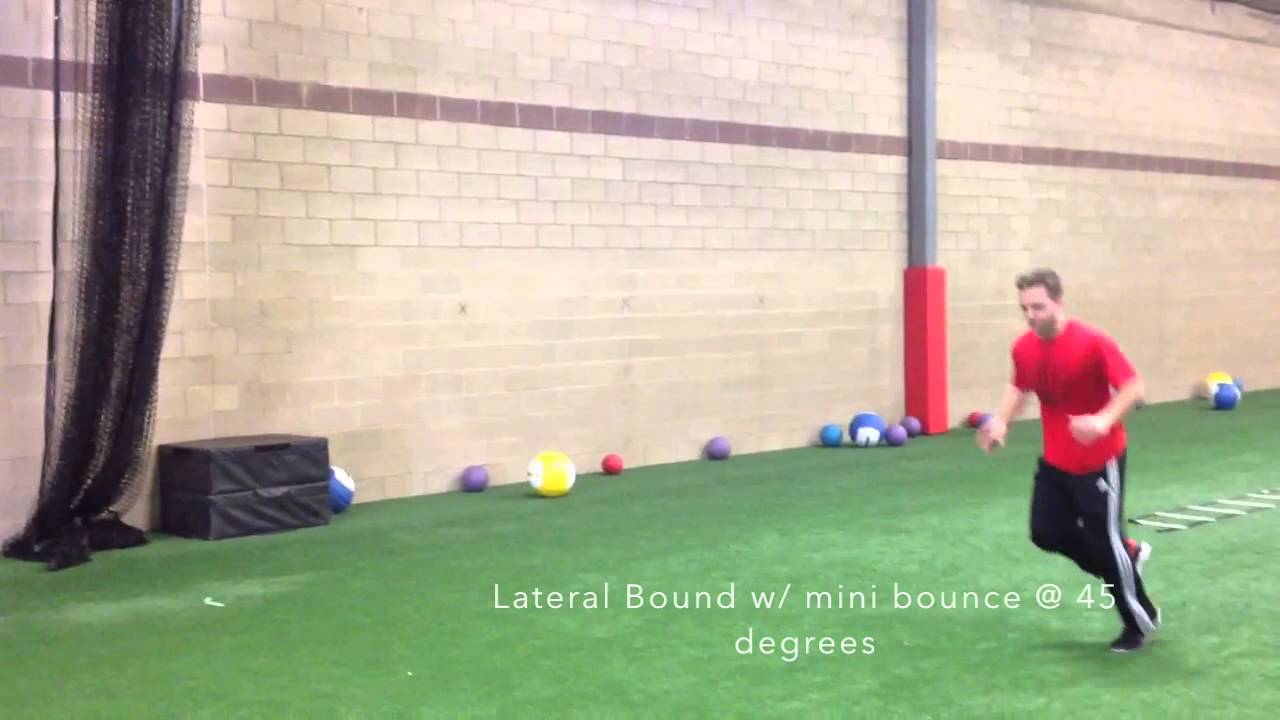 Start by standing forward in front of the agility ladder. Bend your knees and elbows.

Stand on one leg and hop into the first square. Then hop into the second square on the same foot. Repeat this sequence as you progress through the ladder.

Increase your speed as you get better.

ladder to bound from one side to the other

Keep core tight, elbows straight and balance on one leg.

Start with a ball on the right side , bring ball to the center, then over head to the opposite side.

Do both directions on each leg. 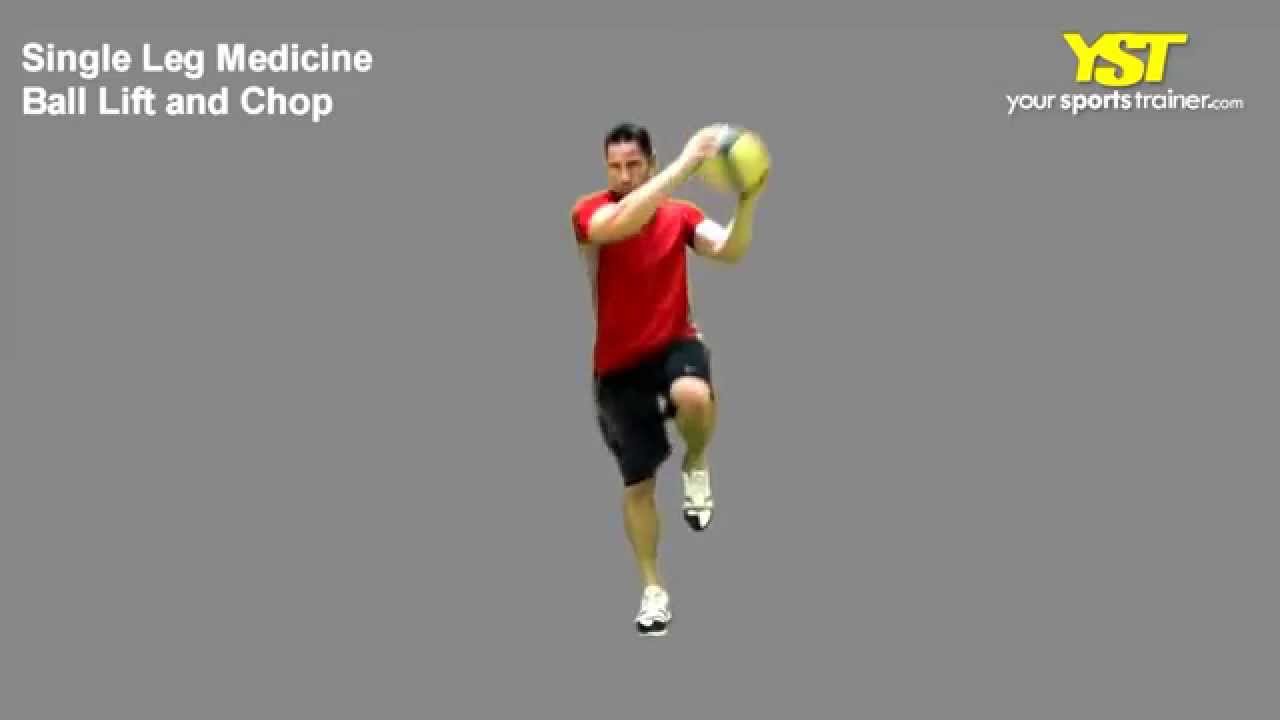 An ACL is one of the most common exercises for female athletes, however they are mostly preventable. ACL prevention exercises and programs have been shown to reduce injury rates significantly. With some dedication and you can reduce your risk with these 9 exercises prior to your season.